Rarely do AA newcomers like the sound of steps 8 & 9, where we contemplate the harm we’ve done others and do what we can to set things right.  I know I certainly didn’t plan on completing them early on.

My siblings, who don’t identify as alcoholic, believe I’ve been brainwashed by AA.  Maybe I have – but it was a washing much needed!  Today I simply do not question the wisdom of the 12 steps, and I seek constantly to apply their principles to my life.  That’s why I recently sent off an amends letter for harm I did almost 30 years ago. 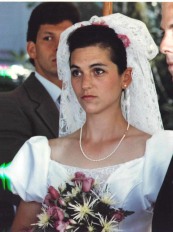 I married at 26 – drunk as I spoke my vows amid a total void of emotion – aside from the guilt of realizing I couldn’t feel.  We were outdoors on a sunny day, and I made myself cry because I wanted the hundred people in attendance to believe I was deeply moved.  The groom had been the object of my sexual obsession toward the end of college.  For over a year his mere presence – or even the thought of him – had spiked my dopamine better than cocaine: he’d been a living drug.  But as we said our vows, I knew his effect had worn off.  He’d been demoted to close friend and source of security.  I appreciated him for that, but love – genuine intimacy – had somehow dropped out of my emotional vocabulary.

As newlyweds we moved to Brookline, MA, so he could attend business school.  I drank.  I was supposedly a writer, since I’d won a big prize in grad school.  I had no friends, no job, no reason for existing – so my compulsive behaviors (described in my book) and drinking simply took over.  The panic attacks I’d experienced in New York City returned with a vengeance.  God, what a nightmare! – that sense of dying amid the obliterating jumble of an indifferent now.  Valium and booze were my only respite.

To rescue myself, I developed a new obsession – a girl, the most popular aerobics instructor at the gym where I’d started work.  Now I had a fresh stash of euphoria to chase after.  There was no physical infidelity because we were both straight – the girl and I – and intensely homophobic.  All I knew was that I wanted to be around her constantly and to reel her into my life as a new fix, a new paradise.  She gave me a little gift – a small metal figure seated on a toilet made from wire, nuts, and washers – that went missing.  I don’t know what drew me to look in the garbage outside, but wrapped in a bunch of paper in a bag within a bag I found it… bent and broken to pieces.

As I looked at it, I registered the magnitude of my husband’s pain and rage.  But with zero compassion – only anticipation that I could show this weird relic to my new friend.  And I did.  I got it out of the garbage a second time.  “Whoa!” she marveled.  “He’s fucked up!” – meaning my husband.  Later, after she’d followed me back to the west coast, we became partners.  It would take another six years for me to repeat the cycle – to betray her for a new host.

Flash forward a dozen years or so to 2000.  By this time I’m five years sober, working through my last amends.  I want to fly out to Boston to see my ex-husband, own my wrongs, and pretty much beg forgiveness – but my sponsor pauses.  She has me go see the rabbi who married us (my husband was Jewish) and ask his advice.  The rabbi ruminated for so long, I worried he’d fallen asleep.  Then he spoke: “You’ve changed little in appearance.  I think seeing you would cause him pain.

Stay out of his life.  Pray that he receive all the love and happiness you couldn’t give him.”  When I objected, trying to explain step 9, he reared up powerfully: “This amends would be more for you than for him!  He has a new wife!  Let him be!”

Flash forward again, now to the spring of 2015.  As some of you know, I learned that my boyfriend of 9 years, whom I knew to be drinking, had been carrying on an affair with a girl from work five years older than his daughter – for several years.  I saw their texts.  I ended our relationship.  This caused me a great deal of pain.

Now we’re up to about two weeks ago.  In the midst of decluttering my house, chucking piles of once crucial papers into the recycling, I came across some old photos of my husband and me.  Look at us!  So young!  So… innocent!   His energy, his humor and kindness – they flooded back to me.  Sitting there on the floor with remnants of my life scattered about, I felt the grief and regret wash over me like a tsunami.  By the light of my own pain, I ventured down those hallways of memory, myself now in his place.  I saw as never before what I’d done, who I’d been.  And amid that mourning came clear direction from my higher power: The rabbi’s advice has expired.  The right thing to do has changed.

Am I brainwashed?  Maybe so.  But it took me only days to write a letter, tears nearly shorting out my laptop.  I sent it to my sponsor, and with her adjustments, copied it out by hand – again awash in tears.  I owned everything.  I told him I’d not been human – that addiction had turned me into a gaping black hole of selfish need.  I told him there was nothing in my life that I regretted more – that I would always, always, regret having abused his trust.  And I wrote that he was wonderful.

I mailed it a week ago with a kiss and a prayer.  I’ve not heard back, but the results are out of my hands – not even my business!  What I know is that I’ve done my best to do the right thing.  That’s how I live now.  I seek insight through prayer and talking with the people I trust most.  And then I act.

In return, I get to hold my head up… and live sober another day.  That’s how it works.

Step 9: Mending the Past

I’m sorry!  I’m sorry!  Who the heck wants to read about amends?  Nobody!  I don’t even really want to write about them, but I’m going to trust, and ask you to trust, that taking a good look will reveal their beauty.

So here’s the quandary.  You may hear people in the rooms kicking around the question: “Who are amends for?  Me or the other person?”  I recall about a dozen years ago hearing a woman announce with contempt, “I’m not making this amends for her!  I’m doing it for me!”  Something sounded wrong in that, but I wasn’t sure what.

Sure, the steps are our pathway to freedom.  But they work because they’re a pathway to change, not self-help.  Didn’t we try every way of helping ourselves when we were drinking, doing whatever our monkey-brains thought would work best?  And what happened?  As I seem to recall, most of us ended up alone and fucking miserable.  The fact is, self-help refers to motivational adjustments to an otherwise successful model of living, such as, “I’m going to exercise more!” or “I’m going to procrastinate less!” not, “I’m going to quit submerging my entire existence in a cesspool of self-disgust caused by senselessly poisoning myself on a daily basis!”

What we need is a transformation, a psychic change beyond anything we could engineer ourselves that redirects our energy toward maximum usefulness to god and our fellows.  If Step 3 led us to stake the best 4th step inventory we could, if we’ve read it to a sponsor who’s made clear our faulty thinking, then something has shifted in us.  In Steps 6 and 7, we opened to asking god to render us better human beings.  Now we revisit our past in this new light.

When my sponsor asked me to generate compassion toward those I’d resented, it felt like she was asking for some crazy move of spiritual gymnastics.  But really, all I had to do is acknowledge that I’ve fucked up many times myself, out of fear and pitfalls in thinking.  Let’s say I was trying to protect my beloved A when I accidentally nudged B into the boiling oil.  “Doh!”  Or in reaching after that prized X, I forgot I was supposed to hold Y and let it fall into the mile-deep chasm.  “Shit!”  Maybe I heard the enticing, faint calls of  J through the tall grass and, in stepping toward them, crushed underfoot the tiny, delicate K.  “Oh, no! Poor K~!!”

Such botched moves fill at least 75% of my addiction memoir; they’re the stuff of which all our deepest conflicts are made.  That’s why my double backward flip in the pike position comes about as I accept that you, like me, were doing only the best you could.  Now watch this move in slo-mo: I decide to cut you the same slack I wish others might cut me – the slack to be human.  It may take me days or years to get there, but eventually, your wrongs become moot.  The focus closes in on the behavior I exhibited toward you.  Would I want those wrongs carved on my tombstone?  Do I want to carry them until then?

Remember, though, that 9 comes after 8, and “became ready” refers to more than just working up nerve.  In early sobriety, I thought I was working Step 9 by writing impulsive letters to my ex’s and telling them way more than they needed to know. By contrast, when I worked Step 8 in earnest, my sponsor wrested my ways of thinking from old to new.  For each person on my list, she crossed out and scribbled notes all over the accounts of harms I thought I’d caused, eliminating 75% of what I’d thought was the issue.  Each time she had me…

1) highlight ONLY those behaviors and attitudes the person was well aware of, to avoid causing further harm

2) boil down the harms via the rubric of selfish, dishonest, thoughtless/inconsiderate

3) come up with one specific example to illustrate each

I was not to apologize.  Rather, I was to articulate the behavior I’d shown and the ways it was wrong, and to ask what I might do to set it right.  She said, “It’s like you left a turd lying somewhere in this person’s life.  You swoop in, say, ‘I believe that’s mine!’, scoop up the turd, and ask if you got it all.”

Amends don’t mean you become buddy-roos with the person.  And some may continue to lob fireballs at you, requiring you to maintain a safe distance.  But when I’ve sat down with people from my past and owned, often with my voice shaking, my very human fuck-ups, I’ve witnessed in almost every one of them the blossoming grace of compassion.  Many have spontaneously confessed fuck-ups of their own.  And sometimes, in the pool of truth we shared for those moments, I would behold in them a dignity and beauty to which our old conflict had blinded me.

The 9th step means taking our new way of life out into the world and trusting god in a free fall.  As I once heard it put: “I make amends to restore that person’s faith in basic human decency.  And when I do that, I restore my own.”