When we hit bottom in our drinking careers, we’re pretty much forced to change.  We’re truly sick and tired of being sick and tired; we recognize, however faultily, that our way is not working.  We become teachable.  That is, we’re desperate enough to try out AA’s approach even though it feels foreign, artificial, and disorienting.

For me this meant giving up the belief that I knew everything.  I’d always felt sure I could perceive the lay of the land in a snap and choose the best course, which I then acted on with chutzpah and a dash of fukitol.  Drinks made me feel better, so I frickin’ took ’em.  Certain designated figures, also known as cool people, carried what I craved, so I chased ’em.  Responsibility and integrity felt cumbersome, so I shrugged ’em off – free to follow my whims wherever they might lead!

And where was that?  Loneliness so lethal I wanted to scream for eternity and futility so rampant I wanted to break and trash and burn every fucking thing that ever touched my life – that’s where my knowing everything took me.

AA – the supposed solution – seemed as silly as a cake walk.  The 12 Steps, anyone could see, held no more wisdom than a hopscotch grid, and yet all these AA dolts claimed that if you sincerely played hopscotch, if you landed in each arbitrarily chalked off square, you’d bust through to frickin’ Narnia or something – whatever they meant by this “4th dimension of existence.”

But since a U-turn could lead me only back to the hell, I went ahead.  I gave up control, followed directions, did the dance.  And I commenced to change – to heal and grow and behold countless unexplored and rich possibilities hitherto invisible to me.

From somewhere inside me, I began to sense a direction besides my thoughts.  They – my thoughts – were still as dumb and which-way as ever, but this new chord, this voice within – it began to lead me instead of them.  Guidance I heard and talked about in AA aligned with this voice, but did not constitute it.  Rather, I had “tapped an unsuspected inner resource” previously drown out by all the fears, demands, and clutter spewed by my ego.

I’d experienced a psychic change.  I’d begun to develop a spiritual life that edged out my craving for booze.

“Our liquor was but a symptom,” says the Big Book, of our messed up approach to life.  If we merely take away the faulty solution of drinking, life hits us full force and feels unbearable. The lasting solution is to live on a spiritual basis which flows in tune with reality rather than fighting it.

Spiritual evolution is not a matter of content.  That is, it’s never a matter of learning X, Y, and Z, passing the quiz, and graduating.  Rather, it’s a habit of cultivating open-mindedness and reaching for growth.  In other words, the conditions for continuous growth are the same as those that freed us from compulsive drinking: I elect not to buy into my thoughts, not to obey my ego, not to fall for the idea that my way is right.  Only by turning away from these easy-to grab reflexes can I open myself to another voice – the more fundamental guidance of a higher power.

Day by day, growth happens at the juncture between what I’m exposed to and how I react to it.  In that immediate crucible, I make more tiny choices than can possibly be noted, but collectively, they coalesce into a “gear” for my outlook.  I plop into good-ole self-pity or reach for seemingly impossible gratitude – though I may end up somewhere between.  What matters is whether I ask my higher power to guide those tiny choices, and whether I commit the incremental shards of my awareness to pursuing that guidance.

Growth can’t happen when ego takes over.  The world becomes scary, because if what I’ve decided is supposed to happen doesn’t, I’m gonna be screwed. There’s never enough, so I lock into my plans.  I get tunnel vision – which means I’m sealed off from potential good outside my will.  I consign myself to stagnation.

The openness of faith reminds me life is always a collaborative effort – mine and god’s.  Sure, I still plan and take action, but with built-in acceptance of whatever plays out.  Even if things fuck up and fall apart, I’ll still be okay.  My “enough” originates not from stuff or status, but from the power of god’s love flowing through me, the strength to generate and nurture and delight.

Jesse & Chip (by permission) 1 month post-flood: “The joy of living [they] really have, even under pressure and difficulty.”

Consider some dear friends of mine who moved to Wimberley, TX, last year only to lose everything they owned in a recent river flood.  One day things were dandy, and next their home was was missing two walls and contained only mud and somebody else’s overturned couch.  They had no renters’ insurance.  Can you imagine that?  I mean, can you really imagine losing everything?  Yet these are two happy and thriving, not only because they’re sober, but because they live on a spiritual basis.  They don’t lament.  They have their precious lives, their energy, their love – a flow that’s providing all they need to rebuild what was lost, even as they pitch in to help neighbors… or support a faraway friend (me) processing a painful break-up.

The psychic change to living on a spiritual basis means we accept life’s uncertainty, taking our best shot and leaving the results to god.  Failure’s fine.  It happens.  Floods happen.  Betrayals happen.  We can only keep listening for the voice within and trying to follow it toward good actions and good people, but with no guarantees.  Because, while it’s true we each reap what we sow, it’s also true we’re  scattering seeds from an unmarked, mixed bag. What will take root and flourish depends, we know, as much on the rain and sun as our work. Yet we do it anyway – and cheerfully. 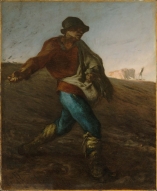 One response to “Psychic Change”