Some folks in AA take issue with the words 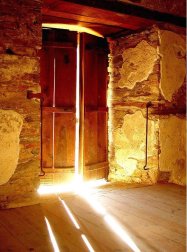 “recovering alcoholic,” preferring to classify themselves as having “recovered from a seemingly hopeless state of mind and body,”* and thus from alcoholism.

Not me!  Sure, my mind and body are healthy and I’m filled with hope.  Even so, an inner part of me remains as broken today as when I first walked into the rooms.  To me, that’s a gift.  Knowing I’m intrinsically flawed motivates me reach for god’s love each day by actively loving what is.

As long as my recovery’s a process rather than a check-box, the doorway is still opening.  There’s always more good stuff to seek – deeper honesty, truer humility, simpler joy.  I’ll never classify myself as a “success,” a done deal.

Here’s a little story about why.

Ten years ago, I was church liaison for an AA group that met in a wealthy neighborhood. For years, the church complained that we left cigarette butts in their parking lot. Homegroup meetings addressed this problem with lots of announcements and a two-person outdoor cleanup team. During our final winter, I served as Official Butt-Ranger myself, scouring the lot with my headlamp long after everyone had left, picking up every soggy thing that could possibly be construed as a butt. Even so, the complaints continued and we were finally given notice.

I phoned the church and asked to speak directly with the priest since our meeting, which drew over 150 drunks every week, would be tough to relocate.   What a huge and diverse crew we were!

In addition to plenty of wise old-timers and on-fire yearlings, the group included several mentally ill regulars. A muttering homeless guy, Dave, came for the coffee and smelled sooooo atrocious you couldn’t sit within three chairs of him. But you could observe each week’s unsuspecting newcomers as they took a seat next to him and, stage by stage, awakened to that fact.

We also had a schizophrenic young man I’ll call Harold, who occasionally suffered irrepressible outbursts at someone not there and had to be escorted from the room. To deal with this, we designated an un-official rotating service position of “Harold-shepherd.”

I also recall an adorable little curly-haired blonde girl I’ll call Robin who, as she shared, would gradually flush beet red until she was glaring around the room and barking out, “Fuck you ALL! I don’t give a FUCK what you think of me!” Whether to kick out little Robin came up frequently at homegroup meetings, but someone always agreed to have a talk with her, after which she’d contain herself for a few weeks.

Something wasn’t right in these and many others present, but we all kept coming back for the same reason: the meeting helped us.

Eventually, the priest called me at my work. Explaining to him, as I had in many emails to his office, that the butts were not ours, I suggested the nearby freeway exit might be somehow related. He said he thought that unlikely. Abruptly, his tone became frank.

“Listen, I’ve sat in on one of your meetings and I was very unimpressed. There’s swearing! People slop their coffee and don’t clean it up. They speak out of turn. Now you – you sound like an intelligent, well-educated woman. How can you sit with these people week after week and listen to the same drivel over and over?”

A little taken aback, I explained: “Some of those people have only one day sober.  They slop coffee cause they’re shaking so bad. Or a few might be close to killing themselves, so slopping coffee’s just not that big a deal. We mop up afterwards. We clean everything.” I decided to risk quoting one of the meeting’s old-timers: “In AA, we don’t shoot our wounded.”

The priest scoffed. “Wounded? I don’t see anything wounded about ‘em. They’re just lazy and immature!”

This was too much. Part of me wanted to fire back, “Jesus fucking Christ, man! Who’d want to listen you driveling on Sunday after Sunday? I’ll take drunks over your hypocritical ass any day!” Instead I thanked him respectfully for the many years of allowing us to meet in his church and agreed to be out by the end of next month.

Richard Rohr, a Franciscan Jesuit, offers a fascinating critique of Christianity. He points out that admitting our brokenness is crucial to letting god in – through our wounds, the cracks in our shell. Jesus healed the sick and banded with outcasts, not the well-to-do. Only when defeat forces us to admit powerlessness is the ego is quelled enough to shut up and let us receive.

By contrast, once Christianity became Rome’s official religion in 313 A.D., it lost touch with the meek and struggling.  Says Rohr, “When you are aligned with Empire, you are forced to prefer a spirituality of achievement, performance, worthiness, and willpower… Conformity to cultural virtue becomes much more important than love of littleness itself or love of any outsider (read ‘sinner’).”**

Me – I ain’t righteous.  I ain’t fixed and never will be.  On daily loan to me from god are my sanity and happiness – and I know it!  The reward is tremendous: acknowledging the remnants of my own brokenness lets me love others through theirs.

I wish I could have taken that priest on a Scrooge-trip to my first AA meeting. My own shaking hands slopped coffee all over the place, which I hoped no one would notice even as I chain-smoked about 12 cigarettes in an hour and dropped candy wrappers under the table, trying my utmost to project a savvy, disinterested coolness that belied the empty, terrified, hopeless, self-disgusted wreck I was inside. In that magic AA room I sensed an energy I could neither identify nor comprehend, but today I can offer the same to newcomers living my past.  Compassion.  Well-wishing.  Patience.  Love.

We moved that old homegroup to a church downtown near a druggie park, but its character changed over time, and after a few years I signed over the lease and switched groups. Homeless Dave froze on the streets years ago. Harold and Robin vanished. Yet the beauty of that inclusive group stays in my heart, a collage of memories exquisitely human in a way that haughty priest (who had not love) will never know.

God breathes love into this leaky skin balloon each day when I ask and open. Like you, I’m a work in progress.