‘Coming Out’ as Alcoholics? The Anonymous People

I finally watched The Anonymous People.  It’s a 2013 documentary on the history and current status of the Recovery Movement – something I, at 20 years sober, had never even heard of.  The “War on Drugs,” I was vaguely aware, has caused drug incarcerations to soar, such that today the vast majority of convicts are serving time for addiction-related crimes.  The film’s creators are striving to get addiction recognized and treated as a disease by the health care and judicial systems.  Such a controversy opens a can of worms way too wriggly for me to address in 1000 words.

What I can talk about, however, is my biggest take-away from the film: that through a misinterpretation of “anonymity”as referenced in the 12 Traditions, many of us alcoholics conceal our recovery from the people we know and thus inadvertently propagate public misconceptions of both alcoholism and AA.  In the long run, this secrecy hinders our goal of helping the still-suffering alcoholic.

Nowhere in AA literature are we told to keep our own recovery secret.  The 11th Tradition deals with PR; no one can purport to represent AA.  The 12th Tradition says only that anonymity is the “spiritual foundation of all our traditions.” But way back in the 1930s, Marty Mann busted out in the public eye with Bill and Bob’s blessings, trying to recast the public’s perception of what an alcoholic looked like.  The film hopes to carry on her tradition – as I believe every alcoholic ought.

I’ve been open about my recovery pretty much since I got sober in ’95.  At the time, I’d been very much ‘out’ as a lesbian for years.  I’d seen no reason people who considered me a friend should not know who I was; if they had a problem with my orientation, they had a problem with me.  In the ’80s I used to make a major production of outing myself to my college English classes on the last day of class.  I remember one year I wore a T-shirt under my men’s jacket that read across the back, “Nobody knows I’m gay.”  The class gasped when, after thanking them for the quarter, I turned and dropped the jacket.  One student in particular, I remember, a street-smart African American boy, was absolutely shocked:  How could such a smart, nice teacher be… one of them-?

That’s why we out ourselves.  We stand up as real people who contradict the phobic stereotypes of public opinion.  All lesbians are ugly shrews who can’t get laid.  All alcoholics are ill-disciplined louts who throw away their lives.  When we out ourselves among people who respect us, we confront prejudice with our human dignity: Look at me and say that.

Flyers I posted on that campus to start up a gay student union were torn down or defaced with hate slurs and warnings about hell.  I’ll never forget walking into that first meeting: the room I’d reserved was far too small.  About 30 kids looked up from every seat plus the floor, tables, and walls, their faces alight with a vulnerable hope.  “We’re gonna show this campus a thing or two,” I told them in my coolest butch tone.  They beamed.  And we did, too.  I left that college after three years, but the group we started still thrives today, 25 years later.

When my son was about two and a half years old, I heard a 5-year-old in the park sandbox scoff at his explaining that he had two moms.  “Who’s your dad?” asked the boy. “Everybody has a dad!”  As bewilderment crumpled my son’s face, I swooped him up, my heart p

ounding, and, struggling to remember this other child was also innocent, offered a gentle correction.  After that, I begged my parents to spend a huge wad of my future inheritance to place my son in a pro-diversity preschool where lots of kids had same-sex parents.  By the time he started first grade at a public school, although his moms had separated, he knew firmly in his heart he just was as “normal” as anybody else.  That deep confidence and happy openness about his moms has won friends and warded off bullies.  Even in his absence, I once overheard one of his friends tell another, “Dude, Keno’s other mom’s girlfriend is an awesome cook!” 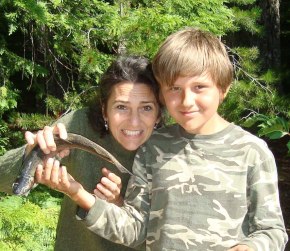 My son has in many ways been my teacher. When I directed a writing center at the UW, I was ‘out’ to each year’s team of student tutors about my gay past and current recovery.  Though I’d jumped tracks again and resumed dating men after 14 years (it’s all in the addiction memoir: my lesbian era was something like a geographic), my son still had two moms, so I shared our truth.  The tutors, in turn, came to trust me with issues of their own, such that my desk became something like Lucy’s Psychiatric Help stand in Peanuts.  In the six years since the center closed, one of those students has sought out recovery and several have come out as gay or transgender.  Others have reached out over Facebook asking if we can meet up and talk about life.  A few have even asked me for help with their alcoholic friends.  And one of those friends, I know for a fact, is sober today in part from my help.

In short, I share my recovery with anyone who wants to know me personally.  “I’m so sorry!” some respond.  “Can’t you just have one drink?” ask others.  I keep it simple, but I speak my truth.  I wrote my memoir to share my entire story in hopes that it might help others who struggle with the same experiences and emotions I did.

The rooms of AA have been my “safe school,” where I’ve  learned that alcoholics are individuals normal in every respect but for a potentially fatal disease that should carry no stigma.  Listening to other alcoholics unfold their inner experiences, I’ve learned, too, that all the quirky emotions I’d imagined, in my isolated loneliness, made me terminally unique are in fact just part of being human.  Whatever I’ve done, thought, or suffered has been known to countless others, and we can help each other through it all.  Showing up in our whole truth, without shame or secrecy, is how we change the world.