Long before Eckhart Tolle, there was Alan W. Watts:

…[Y]ou can only know God through an open mind just as you can only see the sky through a clear window.  You will not see the sky if you have covered the glass with blue paint.  But “religious” people… resist the scraping of the paint from the glass.

[O]ur beliefs… block the unreserved opening of mind and heart to reality.

Hi guys.  So, like, what’re you using to read this right now?  What’re you thinking stuff with?  Is it this? 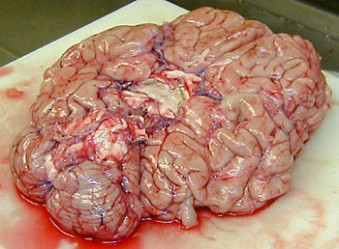 Fresh out of a cadaver. Click for more photos – or better yet, don’t!

The brain is an organ the size of a small cantaloupe weighing about 3 pounds, 60% of which is fat.  It processes sensory impressions, records them selectively as memory, and works out relationships among them based on principles of causality and classification – relationships we abstract as “truth.”

Now, if you’ll excuse me for a minute, I’m going to use mine (a little rounder than the one above) to determine the nature of the universe as a whole, and whether or not it contains a spiritual entity such as we call “God.”

Hmm.  Okay.  Sorry – still thinking…  Meanwhile, here’s a random shot from the Hubble Telescope for ya.

This dying star, once about five times the mass of the Sun, has ejected its envelope of gases, now traveling at 950, 000 kilometers per hour, and is unleashing a stream of ultraviolet radiation that causes the cast-off material to glow.

Back already?  I’m still thinking about it.  Here’s a representation our solar system’s planets – see me thinking on earth, there?  I’m at my laptop.

Okay – ahem! – I’m ready.  Religion?  Atheism?  Aren’t you just dying to know what I’ve decided is TRUE?  Because it’s going to have so much bearing on reality, isn’t it?  I mean, I’m so fully equipped with exhaustive knowledge on this topic, what’s left to guesswork?

Okay, maybe I’m being a tad sarcastic.  Yet the hubris of people both religious and atheistic strikes me as ridiculous to the same extreme.  Both purport to rule on something far beyond the limitations of human thinking.  Sure, written language has enabled humans to compile the collective knowledge of successive generations and arrive at highly technical creations like the Hubble Telescope.  But when we attempt to compile our thinking about spiritual matters, we’re trying to use words and symbols oriented toward material reality to represent that which can  be experienced only inwardly and via immediate consciousness.  And it doesn’t work.

Self-consciousness is a condition thrust on human beings.  If our lives are to have meaning, we must construct that meaning, and contemplating who and what we are is essential to the process. However, contemplating or “opening the mind and heart to reality” does not entail nailing down a pronouncement or definition that we can believe in as “truth” and convey to others.

In fact, to stop short of closure, to embrace faith as NOT knowing, can be highly uncomfortable.  We dislike the insecurity of trusting in something ineffable, of having no solid descriptions.

Religion stepped in long ago to flesh out those descriptions

and abolish insecurity.  Human brains do just fine with stories, characters, and rules, so religion provided them in order to harness a unity of belief among followers – and in some cases, wealth and power.  By Watts’ metaphor, religious texts and dogma present us with a blue painted window intended to represent the open sky of god.

But religion, unfortunately, got distracted in specifying the exact shade of holy blue paint, debated oil versus latex and what holy brush had been used.  Each sect developed “right,” easy to grasp answers – the “idols” of which Watts writes.  If I am certain about the validity of my beliefs, I can say, “Fuck you and your wrong beliefs!”  I can do this with terrific confidence, whether I’m a right wing Christian or a jihadist Muslim.

Atheists, on the other hand, point out, “Hello, folks?!  That’s just some fuckin’ paint, dude!  There’s nothing holy about it, any more than what’s on the walls and ceiling – can’t you see that?  We should just close the goddamn shade and forget about it!”  And they do. They stay in the brain-made world, never venturing outside its constructs to gaze up in open-mouthed wonder.

Whenever I talk of god, people tend to assume I’m talking about some kind of blue paint God.  This is frustrating.

In my AA homegroup, for instance, there are a number of “praytheists” – people who pray because they get results, yet purport not to believe in God.  As alcoholics in AA, we’ve all encountered the inexplicable fact that when we pray for help, something relieves us of a compulsion that has proven far beyond our control.  One of these praytheists – a man sober 24 years – shared last night, “I met with my sponsee today.  We didn’t mention god once.  We talked about our kids, about our jobs – about real things we care about.  God’s not one of those things.”

So much I wanted to ask him, “Why do you think you meet with your sponsee?  Why don’t you tell him to fuck off and get a life?  Why do either of you give a shit about your parasitic kids or your waste-of-life jobs?   Could it be… LOVE?  Might you share a faith in basic GOODNESS?  Look into the depths of those feelings, of how it really feels to ‘care about,’ and you’ll see that you guys talked about nothing but god the whole time!  You just didn’t abstract it and name it directly!”

But he would hear only blue paint.  😦  And I would be saying, “Fuck you and your wrong beliefs!”

In my experience, love is the clear window in our hearts – not our brains – through which we glimpse our own blue sky of god – the energy that powers our spirits.  If you don’t sit with love, if you don’t pursue the meaning of its non-logical warmth as it is actually happening to you, you’ll take for granted love’s fragments here and there and never see it as the fabric of meaning that unifies your entire existence.  As Watts says, “[L]ove that expresses itself in creative action is something much more than an emotion. Love is the organizing and unifying principle which makes the world a universe…” If you can make a commitment to actively love love, you’ll be jettisoned through Step 3 and toward Step 11.  You’ll begin to feel god – not comprehend it.

Our brains, by the way, are not all we are.  Among my own crowd of Near Death Survivors, all of us have experienced consciousness that continued while our brains were shut down and dying.  We would argue that the “YOU” at the helm of your fat-bag brain is, in fact, your spirit.  This is why people sometimes “know” things before they happen, or hear voices, or, in some cases, see spirits.  People who have crossed over and come back with memories – whether brain experts like Eben Alexander or just ordinary schmucks like me – will tell you they felt more “themselves” and more highly conscious outside their bodies than within them.

Here too, though, the experience is impossible to convey in words.  Even those people who want to believe us misconstrue what we describe, assuming the “other side” to be exactly like this material one.  It isn’t.  For instance, loving mothers like Mary Neal will tell you they didn’t particularly care about leaving their children behind, that they knew their children would be fine without them.  Why?  I think because on this side we parcel up love and dole it out selectively, as things we “care about,” so that we’re dependent on “loved ones” for meaning and spiritual sustenance in life.  On the other side, love is all there is.

One response to “Beyond Religion’s Painted Window”