Afterlife: Is it Too Weird to Talk About?

Death visits frequently in my Seattle circle of sober fellowship. Two friends with years of sobriety died this past Tuesday from heroin relapse; one I knew faintly, the other well.  Jeremy leaves behind the 11-year-old daughter he so intensely adored along with a partner and countless friends who loved his playful yet self-deprecating energy, sarcastic wit, and unflinching, quirky, inspiring shares.  He’s gone.

As someone who’s undergone a Near Death Experience followed up by many paranormal aftereffects, I can tell you what I believe.  (Meanwhile, you believe whatever you believe 🙂 ).

In the minutes before my sister died, I was trying doze in the dark hospital room when into my mind flashed “the light” I had known on the other side: it was seeping in under a window, floating to my sister’s bed, and “pooling” above her, a million tiny points of light swirling, gearing up to receive her.  When I opened my eyes, there was nothing.  Eyes closed, I knew the lights were our extended family ancestors, who loved my sister immensely and were preparing, like a million loving midwives, to guide her “birth” to the afterlife.

As I recount in my book or this short film, I had not yet accepted this crazy stuff into my “normal” paradigm of reality, so I kept trying to dismiss it.  A thought-voice urged me to tell her (my sister) what I knew of the light to help her cross, because her fear (that cancer was god’s punishment) blocked her crossing. “She’s got two weeks!” I insisted, believing her doctors, but the voice simply would not quit.  Finally, I consented.  I knelt close by my unconscious sister, took her hand, and tried my best to describe the the light – she’d feel the warmth of god’s love all through her, it would feel so wonderful…  When the words were out, I sat back down.  Twenty minutes later, in a sudden, violent hemorrhage, she died.

Far from serene, I tore around the hospital floor with my brother screaming, “Help us!” An impassive doctor listened to my sister’s heart… but assured us it would stop soon.  One minute I truly wanted to rip that doctor’s head off; the next, my sister reached me.  Her energy was unmistakable, hovering in the room, loving and trying to calm me, loving my brother, loving the frickin’ doctor and nurse – the whole world!  Somehow she filled me with the light again, a euphoric flashback of the bliss I’d known while I got to be dead.

That was twenty years ago.

Just before my father’s death, I didn’t sense the light, but I knew when he was about to cross. I told the hospice worker to get my family, who were all chatting around the kitchen table with a visiting social worker.  In the minute I had alone with Dad, I remember telling him in thought, “You’re gonna do fine, Dad.  You’re gonna do great!”  I felt proud of him, excited for him.  That’s not how you’re supposed to feel, but it’s exactly the midwifey anticipation those million angels had for my sister – this time filling to me, too.

That was ten years ago.

regularly.  Last week, getting ready to leave for work, I resolved to pick up groceries on the way home.  Trader Joe’s or Safeway?  The thought flashed – Trader Joe’s: you’ll see someone you know.  I dismissed it, because  Safeway was right on the way home, so I’d– Trader Joe’s.  You’ll see Mindy.  Along came a faint flash of Mindy’s smiling face backed by the sauces shelf, though in 10 years’ shopping at TJ’s, I’d never once seen her there. Aware of other times I’d been advised in ways that saved my life, I consented: “Okay, fine!  TJ’s – I’ll go!” (I often use this exasperated tone with my guardian angel.)

Six hours later, I’m on the phone with Mom at TJ’s when Mindy sails by in the produce area.  I wave excitedly but can’t talk – I can’t tell her I knew.  I wrap up with Mom, shop a while, then decide I’m gonna track down Mindy.  I hunt through the store – did she leave?  Finally, I see her.  I greet her and explain.  She laughs – she’s a Wiccan – and admits she was thinking “very loudly” this morning that she had to go to TJ’s.  I love her immensely in a strange way – her classic Mindy-ness.  I love life.  It’s right then that I realize, behind her are… the sauces.

What the fuck is going on with this stuff, you guys?  I don’t know!  But I know something is.  I KNOW there is more to this world than the physical.

I believe many of us are steered by guardian angels, even if we can’t tell their input from our own thoughts.  Many NDE survivors can tell – often because the voice contradicts what we want.  One NDE friend of mine descending a staircase “heard” her angel warn, “If someone calls from above, don’t look around.”  A coworker called her name from the top of the stairs.  She tried at first not to look, but it seemed silly.  Turning her head, she mis-stepped, fell down the stairs, and broke her leg. She laughs telling the story.

I believe we’re Life/Love doing something.

Among adults, 10-15% who survive death bring back memories from the other side.  In young children, the percentage is far higher – more like 80% – perhaps because they’re relative newcomers here.  These figures hold across cultures.

Many NDEers encounter a love a thousand times more powerful than any we’ve felt on earth.  Some who get less far just feel a powerful sense of well-being.  NOBODY I’ve met in the NDE community wanted to get back inside their body.  Nobody!  But heaven, if you like, is not a “better place.”  It’s just a bodiless place – so not really a place.

Anger, fear, and pain are defense mechanisms built into our bodies.  We need them to stay incarnate.  So in a sense, the Puritans were onto something when they blamed “the flesh” for all our woes – for the “hundred forms of fear” and resentment that fuck up our existence with greed, insecurity, envy, etc.

And while it’s true we slough off all these bummers when we exit the body, the state of embodiment is nonetheless an absolutely amazing feat!  We are spirit invested in flesh, energy inhabiting matter – like photons, we’re both! What a crazy stunt that is.  Our emotions carry shadows that give them richness unique to earthly life.  So savor it  – all of it, the buoyancy of joy and the gravity of sadness.  As one childhood NDEer put it: “Life is for living; the light is for later.”

Life is for living, so from our perspective, it’s immensely tragic when one is cut short by addiction.  We’ll never again see Jeremy, never hear his raspy voice or belly laugh.  We all miss and mourn him deeply.  Yet Jeremy has transcended to pure Jeremy-ness.  His unmistakable, unique energy is now at large in the universe.  That I know. 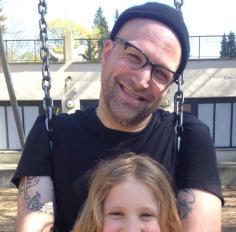 10 responses to “Afterlife: Is it Too Weird to Talk About?”