Looking back can make us grateful

I grew up in an alcoholic home where we could never say, “Dad’s drunk again,” because it might sound like we didn’t love dad.  And truly we all loved Dad, so we showed it by keeping silent.

I grew up in an alcoholic home where we couldn’t say, “Mom’s frustrated with Dad’s drinking,” because it might sound like Mom didn’t love Dad.  And we all knew Mom loved Dad, so we respected them by keeping silent.

I grew up in an alcoholic home where I could never say, “I’m afraid I’m not good enough to be loved,” because it might sound like there was something wrong with me or my family’s ways.  I knew I needed to do what others wanted in hopes of being loved, so I stayed silent… until gradually I forgot how to know what I felt.

others wanted me to do.  Inside my polished shell, a sea of vibrant emotions and passions raged, a crazy frothing of all different colors longing to get out.  I’d been taught to censor whatever didn’t fit the judgements my family held, but as my body grew up, forbidden urges sometimes burst out of me, shameful and bizarre compulsions that frightened me.  I hid them.  There was no way to integrate my outer good girl and that inner chaos – no way that I, at least could see.

Until here came the magic of alcohol.  Alcohol dilated the zillion pores in my shell-like skin so the truth of me could gush out into the world, like it or not!  Alcohol dissolved those walls of shoulds and musts, blasted to hell that relentless rubric of inner criticisms.  I flowed; I fit; I flourished!  Soon life had only two states: drinking, and waiting to drink.  Naturally, I could never say, “I’m ill with alcoholism,” because that would cast aspersions on the one thing that made life livable.

Plus it would throw light on a family disease, declare that my father and I were equally ill.  And the song we all knew, the chorus we sang whenever we still gathered, was all about how nothing was wrong with any of us – though plenty was wrong with outsiders.

But, as the years passed, my android shell, because it was made of unnatural materials and not grown from within, began to obsolesce – to fall apart.  More and more it cracked at the joints – my elbows, my waist – so that my inner mess, which had churned around unsupervised through

the years until all its vibrant colors merged to a muddy ugliness, began to spew on the sensible arrangements of my life.  It smelled bad.  It hurt people.  But I told myself, “Ah, well!  Everybody spews!”

Now the mess for alcohol to clear got heavier – landslides filled with large, trashed objects it had to plow aside to reopen the flow.  And given that it had only masqueraded as love, but really grew from self-hate, it began to slack in its duties. The magic grew thin.

And so I hit bottom.  The keel of my consciousness ran aground on the rock of despair.  I’d tried all I knew with all that I had and ended here: failure.  Existence sucked.  And Option B, to abandon ship, began to seem the saner solution.

But, wait…  Wasn’t there something I’d forgotten? Hadn’t there been – before the android sealed me off, before my passions turned putrid – something?  So distant a memory but faintly recalled – that once there was a time when I believed in… goodness.  And now, if all roads were marked with skull and crossbones but one, a path signed “Goodness →,” would I follow it, no matter how cliché and pointlessly breakfast-cereal-box-maze-like it looked?

AA~?!  Me, going to AA?!  Ha!  What a grim joke.  These people’s problems were generic.  Mine were unique.  And yet, among all these stupid, brainwashed nobodies who failed to see the world rightly as my family did, around these cultish zealots with their scrolls of numbered steps and traditions on the walls, was I just imagining it, or was it in the air?  Goodness.  And maybe from under the floorboards, subsonic, maybe diffused in some elaborate code these people sprinkled through their words, that ancient, sacred radiance I’d long since dismissed as worthless: Love.

A plant with just one dangling leaf may still rejuvenate.  Slowly, the love from these strangers permeated the cracked husks of my old armor.  “You can lay that stuff down,” they smiled. “If you work these 12 steps and stand up in honesty with all your deformities and wounds exposed, the sunlight will heal them.” 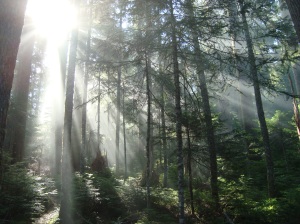 Sunlight?!  Of course I didn’t believe in sunlight!  So what if I’d never even tried looking up! I saw stuff because it was there – not because of some hokey-ass Light Bulb in the sky!  And yet, reluctantly, one piece at a time I shed those dented old plates and cuffs meant to protect me.  Then I felt it: something warmed my skin, my face, and before I’d even realized it, my heart – sunlight!  Colors revived, my sores healed, and the textures of the world that I’d been numb to for so long became vivid.  I remembered how to play.

So began a lifelong inner expedition that continues to this day, bumbling around the dim passageways of my consciousness, discovering how I really feel, what I really love, and who I really am – each step illuminated by my own small lantern of sunlight, which I need to recharge daily.  In the rooms of AA, Al-Anon, and ACA, I meet people who grew up in the very same house I did.  Imagine that!  They’ve given me field guides to flora and fauna to help me to identify those strange creatures I come across in my psyche, some older than I am, spawned by my ancestors.

My father died in regret, and my siblings text that I’m wrong – but I know joy, and I know its source.  I’m now loved freely in a raucous, imperfect new family where I like to sing out loud – as you may have noticed!

This is the story I tell in my addiction memoir.