The “F*ck it” Prayer

Drinking was to me what spinach is to Popeye, except that Popeye doesn’t particularly seem to loathe himself without spinach.  But, as I’ve said in previous blogs, the stuff eventually quit working.  Then I loathed myself with or without alcohol.  Essentially, by the end I could drink enough to walk into walls and still feel chained to the dumbest scumbag on the planet.

When I first got sober, the world came at me with all its razor sharp edges, angry intensity, and impatient people who seemed to always know what the hell they were doing.  Meanwhile I was constantly frantic, bumbling on stage without a script and faking everything at a furious pace.  I knew no way to slow down.  I had to BE all the damn time.  Aack!  I developed panic attacks and a fear-driven hyperactivity that eventually landed me in a clinical depression – my body’s way of forcing me to stop trying to control EVERYTHING.

Fortunately, over the 19.5 years since then, I’ve gradually learned that I can grant myself a lot of the freedom that alcohol once gave me to flow with life and even ride its rapids with relative serenity.  All I need is two things.  One of those is a very special prayer I offer in times of stress.  Yep.  Fold your hands and say it with me now: “F*ck it.”

But wait a minute!  There are f*ck its and then there are f*ck its.  Without a higher power, when I said “f*ck it,” I meant: “F*ck all you assholes!  It’s no fair!  You’re full of shit anyway!”  It was a cry of anger, attack, and self-pity.

Nowadays, with a higher power, the f*ck it prayer means something more like this: “F*ck my mind’s pointless efforts to control this shit.  I quit.  It’s all yours, god, cause I can’t f*ckin’ deal.  I’m gonna trust that all will be well one way or another.”  (The prayer, as you can see, is way quicker!)  In all sincerity, this is a 3rd Step prayer of humility and acceptance.  It signals the admission that we’re powerless to control the outcomes of situations around us, and willingness to let go and let god.

Here are a few opportune situations where you might try out the “f*ck it” prayer.

PEOPLE #1: SMALL TALK: Social awkwardness.  Wanting not to be left standing dumbassedly alone in a group setting.  Wanting people to like me.  Maybe even to let them know I like them.  So… what is there to say?  Aack!  Around me acquaintances seem to produce bon mots of witty exchange as easily as a gumball machine produces gumballs.  I, meanwhile, can talk about my… um… couch!  It has a lot of dog hair.  Except that would be so boring. I’d be shunned, cupping my social worth like a small dog turd I wandered away…

Time for the prayer! F*ck it.  “You know, I’ve got so much dog hair on my couch, it’s kinda woven in.”  There, I said it!  Maybe it’ll fly somewhere, or maybe crash and burn.  But if I’ve prayed my “f*ck it” prayer in the right spirit, I don’t care.  Why?  Because “I’m going to trust that all will be well one way or another.”  My world won’t end if this conversation fizzles.

PEOPLE #2: DROPPING INHIBITIONS: Something we rarely stop to think about is that social fun involves trusting others.  It means being spontaneous – saying or doing the silly thing that comes to mind as we dance or Slip n’ Slide or stuff our faces with marshmallows.  Whatever it is, you have to just do it.

EXCEPT… we have inhibitions.  As communal primates, we’re genetically programmed to suppress behavior that might get us ostracized.  That’s why we don’t go to school without pants on or sing really loudly on the bus.  Inhibitions are like little uniformed censors in a brain booth who stamp “denied” on any idea that might make us look like an idiot.  Unless you’re drunk.  Whenever I got shitfaced, so did my censor.  He got a sense of humor, cranked some tunes in his booth, and really didn’t give a rat’s ass anymore what anyone thought about us.

Once we get sober, though, that damn censor is always awake and wary that people might judge.  “Don’t risk it,” he says.  “We can’t pull it off.”  Goofy idea DENIED!

What sober people have to learn to do is manually relieve the censor of his duty.  Like this:

“F*ck it.  The friends around me love me enough to see me and not judge.  Besides, everyone is way too busy thinking about themselves!  I’m gonna tell the joke.  I’m gonna make the face, do the voice.”  Here’s a picture from an AA birthday party at my house years ago.  All these friends are stone cold sober.  We’ve sent the censor packing and lept from seaside cliffs.  We’re freed not by mood altering drugs, but by our love and trust. 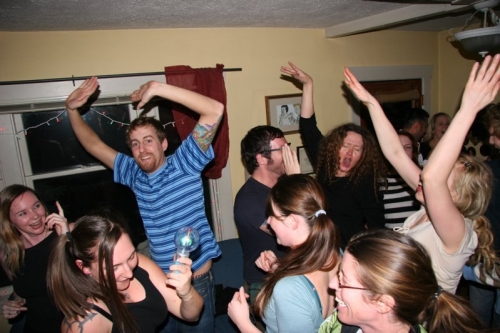 PEOPLE #3: CONFLICT:  Conflicts come up with family and coworkers, and sometimes even in our programs.   The other person sees things differently because of loads of stuff predating this clash. F*ck it.  I can’t change their childhood or prevailing brain patterns or set ways of responding to whatever.  I can only change myself.

(For advanced studies of the “f*ck it” prayer in this context, go to Al-Anon.)

LIFE’S PIDDLEDY-SHIT, e.g. traffic, messy house, long lines, deadlines, stuff I gotta do:  To me, when this kind of stuff is happening, it’s always a huge deal.  If my son is late for school on a Tuesday, if I’m late to meet a client, if the line I’m in is long, it means ruin and utter devastation will ensue.  That’s why I need to pray…

F*ck it.  I am so not in control, here.  God, it’s all yours!  I’m just here doing my best and leaving the results up to you.

The trouble with life’s piddledy-shit is that it really is life – or the majority of it.  The challenge is to love it as life.  For me, big risks survived have helped take the stress out of piddledy-shit, but the effect is temporary.  Each time I climbed Mount Rainier and made it back, I thought I’d never sweat the small stuff again.  Having gone through breast cancer had something of the same effect.  But I forget!

FINANCIAL FEAR: Every month it seems there’s no way I’m going to make the mortgage.  I often delay until the last day possible, but somehow it gets paid, and while my bank balance reads, say, $7.36 for a while, we just eat whatever’s in the cupboards.  But do I learn that things work out?  No.  I seem to prefer envisioning a future where my son and I reside in our car.

The thing about financial fear is, it’s ALWAYS about the future.  If we stay in the now, we’re okay and needs are met.  Even sober friends of mine who’ve lived through homelessness have come out okay on the other side, so long as they didn’t drink.

God – not people, places, and things (including dollars) – is ultimately what cares for us.

At the beginning of this blog, I said there were two things I need to live with the same freedom alcohol once gave me.  One of them is the “f*ck it” prayer, which I’ve just told you about.  But what about the other?

It’s love.  Love for you.  Love for god.   Love for every detail of life’s experiences.  But I’ll save that for another blog.  Can’t write everything!  F*ck it!