We are not saints. The point is, that we are willing to grow along spiritual lines.

Saints are supposedly perfect people, whereas mystics are visibly imperfect people who have been convicted by moments of very real divine union.

Alcoholics who merely stop drinking without drastically changing their approach to life remain ill and, consciously or unconsciously, suffer.  All the emotional dysfunction that spurred them to seek relief through alcohol persists; only their fix is gone. They live “dry” rather than sober, inflicting pain on those around them as they vent pent-up frustration, some a little at a time and some in binges, just as they drank.

A truly recovering alcoholic experiences a “psychic change.” As Carl Jung described the shift, “Ideas, emotions and attitudes which were once the guiding forces of these men are suddenly cast to one side, and a completely new set of conceptions and motives begin to dominate them.” Dude was right!  Ideas, emotions, and attitudes — completely switched.

The 12 steps, worked with a good sponsor, transform all three. During steps 1-6, we let go self-centered ideas about our place in the world and how it ought to work; emotions of anger, shame, and envy; attitudes of victimhood and arrogance.  In steps 7-12, a new set of conceptions begin to develop — because our vision has cleared!  Somewhere in the mix will be new ideas of what god-reliance means, new emotions of gratitude and unconditional love, and new attitudes usefulness and even — on our best days — humility!

In my own sobriety, I go through dry periods when I “forget” the way of life AA has taught me.  I start to imagine I have some power and the right to feel a bit prideful until, without realizing it, I’m navigating based on projections about how others perceive me.  My pride is effectively running the show.

Here’s the cool thing about psychic change, though: it’s not kick or phase. It comes with its own safety-catch, because shit always hits the fan. And thank goodness it does, because when a big chunk smacks me, I don’t puff up my pride to chest-bump against reality. Rather, I fold — and fast! I surrender with a prayer like this: “I don’t know what’s going on, but I trust you. I thought I knew stuff, but it looks like I was wrong. Please guide me.”

Just one prayer lets me see that my whole arsenal of I-know-best weapons was made of sand. All slips away and I remember that I have no power in this life but to love.  None.

Mysticism sounds like a remote, woo-woo concept.  It ain’t. According to Merriam Webster, all it refers to is a “direct knowledge of God, spiritual truth, or ultimate reality [that] can be attained through subjective experience (such as intuition or insight).”

Historically, mysticism has acquired a shitty name from various religions. It’s easy to see why. Direct knowledge of god cuts out the middleman — the church, temple, or mosque — so many religious authorities have safeguarded their bread and butter by denouncing it as a dark, occult practice.  “What?!  Seek God yourself, from your own heart on your own individual path? What if it’s Satan yer talking to?”

Today, widespread mysticism is, I feel, the only thing that can save humanity — not from damnation, but from irretrievably defiling our planet. Religion has posed a stumbling block for scientifically educated people in recent centuries: distaste for religious dogma translates to distaste for god.  Today, ego (god’s antithesis) rules at the societal, economic, and political levels. Results include climate change, oceans choking in plastic, and an entire countryside soaked in cancer-causing glyphosate, to name just a few.  If this isn’t an apocalypse, I don’t know what is.

God itself is about only love — simple, direct, and freeing.  NDErs from all walks of life encounter the same force on the other side: overwhelming love, a love so omnipresent that, like the brilliance of the divine Light, it erases petty differences, competition, all the conflicts and cross-purposes of ego.  God envelops us because we ARE god.  God rejoices when we are loving and is pained whenever, in even the smallest ways, we harm self or others.

Religion, by contrast, if chock full of human pride and ego.  A jealous or vengeful God? A God who plays favorites? Rewards an “elect” of saved cool cats?  Gross!  And yet, these depictions taint the idea of god for billions of people. 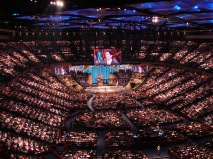 A dry alcoholic friend of mine who swears by evangelist Joel Osteen had me listen to some YouTube sermons that, for me, epitomized religious pride and ego. From a huge stage in his Houston megachurch, Osteen tells many thousands of followers, “What God has in store for you is going to amaze you! The people He’s going to bring across your path, the influence He’s going to give you!…  You are not working to get victory, you are working from victory.  When you know that you’ve already won, there’s a rest. You know the outcome…God said, he always causes you to triumph….”

Osteen’s message is clearly that if we kiss god’s ass enough, we’ll win!  We’ll get a leg up over all those other bastards and one day they’ll have to eat our dust in the wake of our victory!  Hey, it’s sure worked for Joel! My poor friend, by contrast, is constantly deciding God must hate him.

Pride builds a wall around us, inside which we languish awaiting our day of “victory.”  Seeking god opens the door to joy right here, right now — the simple freedom to love and be loved.

PS: In TOTALLY unrelated news (except maybe that it involves humility while livin’ large & sober 😀 ), friends & I attempted 14,410′ Mount Rainier last weekend but had to turn back just 1,200 feet from the summit due to delays and high winds.  Short movie account here: https://youtu.be/g8OSqqjcoJ0